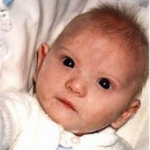 Bradley was born on the 15″‘ December 1989. He was 46.9 cm in length and weighed 1573 g, head circumference 30 cm. He was born with a cleft in the soft palate at the back of the throat, which was repaired in September 1990. A minor heart defect was also detected but caused no great concern at the time. He was tube fed for most of his 10 day stay in hospital but I managed to get him to take a bottle well enough for him to come home. He suffered badly from reflux and was treated with various medications etc.

He was diagnosed with a mild-moderate bilateral sensory-neural hearing loss in December 1990 and has had several grommets and ongoing ear infections. He was fitted with hearing aides in February 1991. In July 1992 it was confirmed that he had an alternating divergent squint and is extremely short sighted for which he wears glasses.

He sat by himself at 17 months, 4 point crawled at 2 years 4 months, pulled himself to standing at 3 years and walked with the aid of a walking frame at 4 years. He is 9 now and still cannot walk unaided or stand unaided. He was fitted with an “Up-Suit” in August 1998 which we hope will strengthen his muscles and trunk to enable him to walk.

He has no vocal communication at all and does about 4 signs, biscuit, food/drink, toilet and round and round. He is not toilet trained but is nearly toilet timed as I have more successes than failures.

He is now 9 years old, is 125cm tall, weighs 18 kg and has a head circumference of 46cm. He likes to play with his bells, roly-poly and the curtains in his bedroom. He has a love hate relationship with the vacuum cleaner and just loves to throw things off the couch, swipe things off the bench or table, in general, just tidying up for mum!!!!!

He has a delightful nature, has always been a very happy little boy who will amuse himself. He is the light of my life

Bradley – by his sister Amanda

My name is Amanda and I am 14 years old. 1 would like to tell you about my little brother Bradley. He is 9 years old and was born on the 15.12.89 with Cri du Chat Syndrome, which means cry of the cat. He needs glasses and hearing aids. He can feed himself (when, he wants to!) but cannot yet walk or talk, although he does do some sign language e.g. biscuit, food/drink, finished and toilet. He can also walk if you hold on to him.

Bradley being the way he is has changed our lives. We need to help him more and he needs to be looked after more than a normal 9 year old child.  I remember it was Christmas Eve and we went to the Frankston Hospital to see if he could come home. I cried so much because I wanted him to be home for Christmas. He did end up coming home then which was a relief, but I was so upset at the time. But it was a great Christmas present just to have him home.

As he has grown up through the years, I notice how much cleverer he has gotten. He also loves my wallpaper in my bedroom. He used to stand up at my door, waiting for someone to open it for him, until he learned to open it himself. He climbs on my bed and just stares, with his nose touching the wall, at the little people on it. But because we used to have lots of fun on my bed listening to loud music and dancing in my room, he now loves it so much and thinks of it as a sort of playroom. He chucks my toys off my bed, even my pillow and sometimes my doona. Once, I came in and he had swiped everything off my desk and shelf, so that’s when I had to stop letting him in by changing the doorknob to a round one. It was a shame though, because he has so much fun. 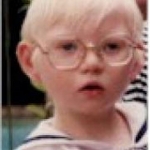 He’s such a happy little boy. Sure, he has his moments, but he always entertains himself and very rarely cries. The only bad thing is pulling hair. It kills! He’s been doing that for a while now, but hopefully he’ll grow out of it soon.

I love playing with him and roughing him up because he can never stop laughing. He is very ticklish. His laugh is so cute!

He is so precious to me. I have pictures of him around my room and all in my school diary. I love him so much and I always will, no matter what is wrong with him or how naughty he is, he’s my little “B”.

It’s hard to believe that Bradley is now 13. Where has the time gone? He no longer wears the upsuit, however he may need to go back into one at a later stage. He has AFOs now which help hold his little feet in the correct position, assisting him with standing and walking.

I thought it was about time I gave in and got Bradley a wheelchair. It was a very hard move for me to make but I have to admit he sits up straight in it and it is a lot easier to push him around now when we are out and about. It’s a lovely purple colour and he can self-propel it, if and when he so chooses. He still can’t steer. He walks quite well with his AFOs, however, only aided.

I guess in 13 years he has come a long way, not as well as I would have liked in some areas, but he makes up for it because he is such a delightful little boy and will always put a smile on my face.